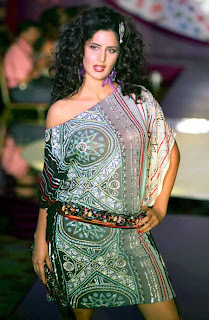 Who would not like to see the sexiest John Abraham and hot Bollywood diva Katrina Kaif together? This is the first time when the duo is working together in a film titled 'New York' produced by Yashraj films. 'New York' also stars Neil Nitin Mukesh of Johnny Gaddar in a leading role. These days Neil is busy in wrapping up 'Freeze' with Bipasha Basu, which is said to be an action film.

New York is directed by Kabir Khan of Kabul express. This will be the second time Kabir Khan will direct John Abraham. The movie is slated to release in early 2009. The story of the film is yet not revealed but it seems that this would be biggest hit of 2009.

But the question is how Salman allowed Kat baby to act opposite his one of the biggest enemies John Abraham. Confusing na?

Well! whatever the scene is but according to sources due to this reason Kat and Sallu miya had a big quarrel and Salman slapped Katrina but Kat is refusing the matter and taking it as a rumor.

Hope so cutie Katty.
Posted by asha mishra at 2:05 PM