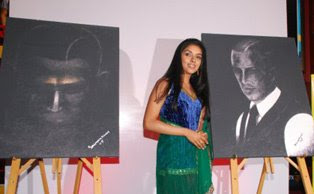 This is the first time in Bollywood that an actor is promoting other actor’s movie and that’s also when he has no connections with it. Everybody knows that Aamir Khan and Salman Khan have been good friends for a while now. But it is needless to say that Salman’s generosity and love for Aamir is truly special.

The story goes that Salman was so impressed by Aamir’s performance in Ghajini that he decided to gift him two special paintings made by none other than himself. The paintings were unveiled by the leading lady and Aamir’s co-star in Ghajini, Asin. The actress unveiled the Aamir Khan’s Ghajini look by Salman at the INOX at Nariman point in South Mumbai on 24th December.

The painting was special for her not only because she is the leading lady in the film but also because it was made by Salman, with whom she may soon be paired with in her next flick ‘London Dreams’.

Asin said that she was highly impressed by the creative talent of the star, who can paint so well’.
Posted by asha mishra at 5:58 PM