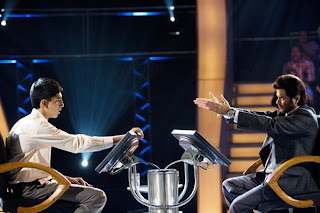 An anticipated, ‘Slumdog Millionaire’ has begged nominations in major categories at the Golden Globes, which are considers precursors to the Oscars. The film has already won three awards at the ‘British Independent Film’ awards namely Best Film, Best Director and The Most Promising Newcomer ‘Dev Patel’.

For the 2008 Golden Globe Awards, the film has been nominated for ‘Best Picture-Drama’, ‘Best Director’ for Boyle and ‘Best Screenplay’ for Simon Beaufoy and ‘Best Original Score’ for A.R Rahman, given by the Hollywood Foreign Press Association.

Shot in Mumbai, the film tells the story of a slum boy who goes on to take part in a quiz game show “Who wants To Be Millionaire?” and manages to win Rs. 20 Million. It is based on the book “Q and A” written by Indian author and diplomat Vikas Swarup. The film released in the US recently and has received both critical and commercial success. Beside Dev Patel other actors in the film are Freida Pinto, Anil Kapoor and Irrfan Khan.
Posted by asha mishra at 9:41 PM