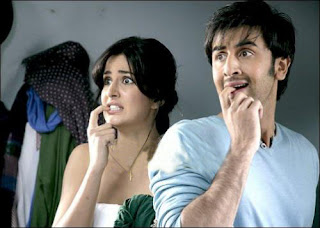 For the very first time Bollywood Queen Katrina Kaif and the hot and happening Ranbir Kapoor are coming together for Rajkumar Santoshi’s directorial venture ‘Ajab Prem Ki Gajab Kahani’. Katrina Kaif recently got hit on the face by Ranbir Kapoor, of course unintentionally.

Kat was shooting with Ranbir on the sets of the movie in Madh Island where the duo were acting out a chase sequence where they were hounded by goons. The scene demanded Ranbir to turn around and hit one of the chasing goons. He did that but in the bargain hit Katrinas’s nose with his hand and the actress ended up with a bleeding nose. She was immediately given a first aid on the sets.

The actress was in great pain but realized that but it was unintentional, so she didn’t complain. Injured Kat confirmed the incident. Ranbir plays Prem, an innocent guy in the film and he will play two distinct characters in the movie similar to Charlie Chaplin and Raj Kapoor.

The film is gonna hit the box office soon this year.
Posted by asha mishra at 11:14 AM