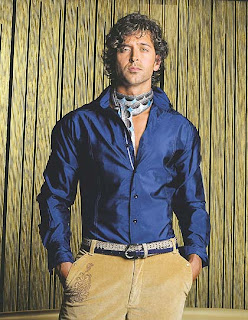 What would you expect Bollywood heartthrob and multitalented Hrithik Roshan to do on his birthday? Hrithik is to celebrate his 35th birthday on Saturday with gusto but instead at present he is shooting for his upcoming flick ‘Kites’. His birthday is another working day for him and so he will be shooting that day too. With his international appeal he continues to woo Bollywood filmmakers and at present he is one of the bankable stars in the Indian Film Industry.

He gave a number of blockbusters in his filmy career. This dazzling sizzler has proved himself in each and every role he portrayed on silver screen. Whether, it was a Mughal Emperor from epic romance “Jodha Akbar” or a mentally retarded child in “Koi Mil Gaya”, his charisma never faded. He will be back in the league soon with two releases lined up this year as of now, “Luck By Chance” and “Kites”. ‘Luck By Chance” is slated to hit the theatres on Jan 30 while “Kites” is tentatively scheduled for a June release.

Here’s wishing all the good luck and success and many more joyful years to come.