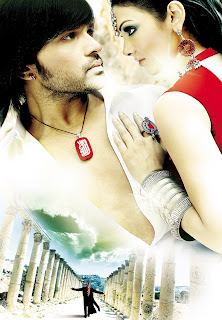 Once again the singer-musician-actor Himesh Reshamiya is making news and this time not for his conflicts with the judges on the sets of music realty show ‘Sa re Ga Ma Pa’ but for his upcoming flick “Kajraare” directed by Pooja Bhatt. In this movie Himesh will act opposite to popular Pakistani actress Mona Laizza. The story of this new musical love saga is written by Mahesh Bhatt. The movie is being shot in the simply beautiful and stunning locations around the globe.

The movie is already being hyped by saying that the storyline of ‘Kajraare’ is very similar to that of ‘Sadak’ in which Pooja has acted years ago opposite to Sanjay Dutt. This upcoming flick is an Indo-Pak love story and the director Pooja Bhatt is really excited about this project.

The film is slated to release on 19th February. We wish Himesh all the luck and hope that this would be a big come back on the silver screen for him.
Posted by asha mishra at 8:42 PM