Lara On The Cover Of Faishon Magazine 'Grazia' 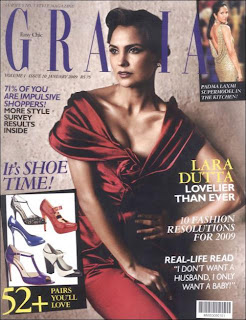 Former Miss World and the glam girl of Bollywood Lara Dutta may not have any mega releases last year though she had a special appearance in the song ‘Phir Milenge Chalte Chalte’ in the movie ‘Rab Ne Bana Di Jodi’ and voice over in animated movie ‘Jumbo’ but her charisma is still enough to catch millions of hearts. Lara’s upcoming flick ‘Biloo Barber’ is set to release on 13th Feb but before setting the screen on fire the gorgeous actress is seen as the cover girl for fashion magazine ‘Grazia’ January 2009 issue. She is looking simply stunning in a chic burgundy dress.

However, except ‘Billo Barber’ the dazzling diva would be seen in quite a few films this year such as ‘Blue’ and ‘Banda Ye Bindaas Hai’.
Posted by asha mishra at 12:38 PM